Experts on social movements in Brazil speak at CLAS event

Recap of Democratic Participation and Social Movements in Brazil 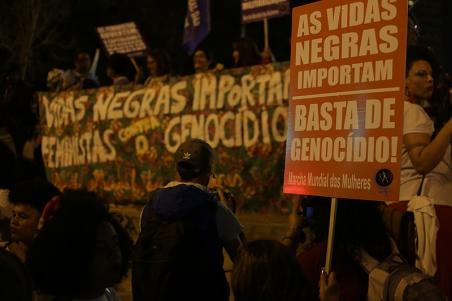 This installment of CLAS’s ongoing The Outlook for Brazilian Democracy series focused on democratic participation and social movements in Brazil, and it was graced by experts on gender equality and reproductive rights, self-housing and urban mobility, conservative and authoritarian trends in social movements, and international networks of organized social action. CLAS director Ben Lessing asked each participant to make brief presentations about their area of expertise. Then two of the panel’s student organizers asked questions to the panelists, followed by a brief debate among the panelists.

Brazil’s feminist movements have successfully been reframing abortion legalization and democracy to women in Latin America.

According to Debora Diniz, despite the Brazilian High Court’s (STF) initial leadership in Latin America on abortion rights, through a ruling that abortion would no longer be a crime in cases of anencephalic fetuses, the topic has not advanced in the STF for over 10 years. The reason for this delay is a national conservative and religious movement that, through implementing “fear in the political space,” affects the priority given to the topic by the STF and the Brazilian Congress.

To Diniz, the call for judicial or legislative review of abortion regulation is a permanent element in the struggle for abortion rights. These demands are fueled by moralistic forces who seek to control people’s reproductive autonomy and integrity.

She remarked that these groups are controlling public arena discussions about abortion rights even in progressive political sectors. Diniz recalled that when former president Luiz Inácio Lula da Silva said in early April that abortion is a public health issue and therefore should be decriminalized, he provoked so much political backlash that Lula later reframed his assertion by saying that he is personally against abortion, but he still believes it to be a public health issue.

When questioned by the press if this was the right time to discuss abortion in Brazil, Diniz answered: “Yes, the time is now, and the Brazilian Supreme Court is the proper democratic institution to answer the question brought by the feminist movement.”

Rafael Soares Gonçalves reminded the audience that a process of constant struggle and resistance marks the history of social movements in Brazil. Since the end of the military dictatorship, new forms of demands created by the growth of politicization of daily life led to the reconfiguration of several social movements. Led by residents of peripheries and working-class suburbs, these movements fought not just for equal rights, but against inequalities. This new form of grassroots organizations allowed for the emergence of a new conception of politics for these communities.

However, in recent years, political, social, and economic crises affected the ways grassroot groups organize and function within these communities, reshaping their interests and ways of representation, especially regarding subjectivities, cultural codes, and political actions. The focus on these types of attributes reinforces their centrality as actors of their own history and experiences of oppression.

Gonçalves remarked that right-wing movements in Brazil have grown despite the reframing of these collective approaches for five reasons: (1) the partial absence of democratic forces in the working class or other progressive spaces; (2) the vigorous growth of “business ethics/entrepreneurships” in working-class spaces, motivating individualism; (3) a powerful network of evangelical churches that offers robust local support for the residents of their community, discouraging other forms of collective associations; (4) a complex relationship of local criminal groups imposing “the law of silence” that curbs community engagement with certain social movements; and (5) a loss of state legitimacy in these communities, whether due to violent approaches by the police or to another form of violence substantiated by state policies. Because of these factors, Gonçalves argued that most mobilization focuses on fixing specific, concrete issues such as broken pipes, hillsides collapses, etc.

If you see a white guy and a black guy walking, the white guy could carry stolen merchandise, but you stop the black guy.

To Yanilda González, the relationship between state violence and democracy is essential in many global contexts, not just Brazil. However, Latin America offers a unique perspective since, even after the transition from the dictatorship to democracy, the state remains a major perpetrator of violence against its citizens.

Because it has public support, this form of state violence is also a problem for the consolidation of democracy, creating a paradox where state violence in democracies achieves a status of legitimacy, whereas in dictatorship periods it does not. For González, one explanation for this support is the profile of the victims. While during the dictatorship most of the victims were middle-class university students, in democratic states they come from disadvantaged sectors. The “three Ps: preto, pobre and periférico” (black, poor, and from the urban periphery).

Her research shows that, in contrast to U.S. literature on political participation where stigma and negative messages from the state demobilize people, stigma is an important mobilizing force for family members of victims of police violence.

I’ve never considered myself a black woman. It was only after my son died, I realized it…I didn’t consider myself black or white or Indian. I didn’t know anything about that.

—mother of a victim

In this form of mobilization, there is an element of “intersectional collective action” that enforces intersectional identity in the formation of these movements, predominantly formed by low-income, black women from the urban peripheries. Their mode of action is usually the targeting of institutions and their actions, especially in the discursive field, while using the language of democracy and citizenship to challenge state practices. It is a mode of social movement action that González calls “resilient citizenship.”

According to Isabela Kalil, under Bolsonaro’s government there is an overreaching process of criminalization of social movements, but if we look closely, these criminalized movements are usually left-wing. As stated by Bolsonaro in response to Michelle Bachelet, “I didn’t harm or threaten Brazilian democracy. I’m not reducing Brazilian democratic space; I’m only reducing the democratic space of the left.”

Right-wing social movements, in turn, play a key role in Bolsonaro’s anti-democratic and anti-institutional agenda by adopting a moralistic, ultraliberal, conservative, and anti-corruption discourse. To Kalil, it is a sign of an over-articulation between new liberalism and new conservatism, juxtaposing a rationality of deregulation and amorality in liberal economic policies, with a regulatory-driven rationality regarding morality.

The figure of the “cidadão de bem” (“good citizen”) validated this “new” form of right-wing social movement. To Kalil, the “good citizen” is a figure that captures a set of anti-system and anti-corruption fantasies. For instance, corruption, for them, is a problem inherent to governance or public management, but is absent in private companies. This is one reason these groups are against any form of social program, blaming not only the state, but its users—seen as “freeloaders”—as corrupting the need for rights and privileges (hence their slogan: “direitos humanos para humanos direitos”: “human rights for rightful humans”). On the other side, corruption has many meanings related to values and family order. They portray themselves as a form of “behaved” social movement against a “violent leftist” form of protest, a representation enforced by mainstream media.

Diniz questioned if it is really a problem just for the right to mobilize “fanaticism.” She offered a more complex view of a problem that is embedded in Brazilian society, determining how Brazilians practice politics, and how politicians frame inequality, usually resorting to class issues and avoiding race and gender. For Diniz, it is not just an issue for the right, but for the progressive left as well.

To González, it is difficult to build a consensus on public opinion regarding police violence. Although a big part of society believes the police to be too violent, there is always a quarter of the population that thinks that the police are not violent enough. To complicate this societal division, a significant portion of the population is neutral on the topic, because police brutality does not affect them, thus making it difficult to advance structural reforms.

Gonçalves stated that the relationship between informal and formal sectors is not dualistic. Informal and formal markets are connected and sometimes provide essential benefits, like employment, to communities. However, this relationship, especially when connected to criminal groups and the “law of silence,” quells other forms of collective social mobilization. Even the idea of entrepreneurship present in informal markets and in influential evangelical churches has a negative effect in other forms of collective mobilization. For Gonçalves, informality is neither a bad nor a good thing per se, as it often represents a solution for the livelihood of families.